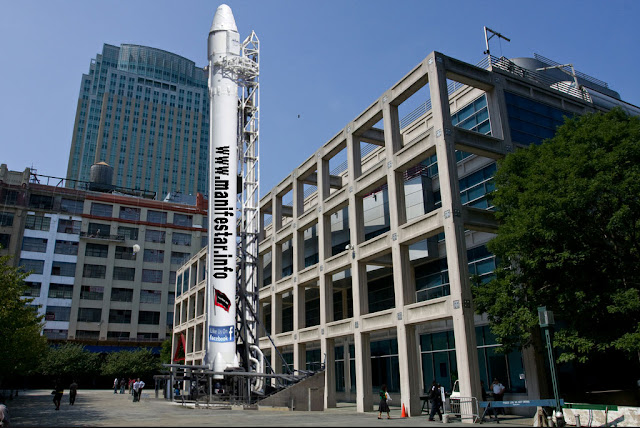 For the 2012 World Science Festival at Innovation Square, Metrotech Center there will be an Augmented Reality Rocket Launch which will place a flag and a colonist on the moon. The project is sponsored by the international group Manifest.AR. Mark Skwarek and John Craig Freeman from the group have spear headed the effort and will be in communication with the rocket in real time during the festival. Images from the rockets flight will be posted on line in real-time. The rocket will take off from Metrotech Commons in Brooklyn, New York at 4:00. As most know the general earth moon cross time is 3 days but because of free enterprise in the aerospace sector and the incredible advances in augmented reality technology Manifest.AR is sited as saying the crossing can be made in 3 hours.  At 7:00 the general public should be able to view a Live Stream from  U.S.A. satellite Galaxy-11 as the colonist lands on the moon.
The general public is allowed to view the launching from the safety zone. For safety purposes smart phones or tablets must be used to view the experience.

image by:Galaxy-11
There will be a jumbo tron screen with a live feed from U.S.A. satellite Galaxy-11 which will be at optimal viewing distance from the moon during the time of the lunar landing.The landing will be televised live on the jumbo tron screen in real-time.A smart phone or tablet will be required for viewing although visitors without will have an opportunity to look at a group device.More information may be found here --http://rocketmoonlaunch.blogspot.com/Manifest.AR is an independent aerospace developer working with augmented reality. We make the impossible reality every day.
13 comments: